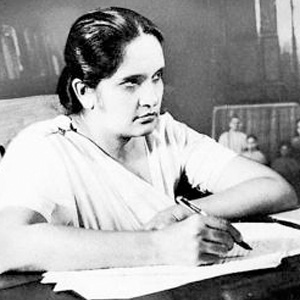 She, at first, was induced into politics by the Sri Lanka Freedom party of her husband who was
assassinated while he was prime minister of Sri Lanka. With a decisive victory in 1960, she became the first ever woman prime-minister. Her keen interests in socialist economic policies, neutrality in international relations and active encouragement of the Buddhist religion and promotion of Sinhalese language and culture won her a lot of support in her tenure. However, the deepening economic crisis and the SLFP coalition with another party gnarled popular support for her government and was defeated in 1965 elections. With the socialist coalition
of the United Front, in 1970, Bandaranaike pursued more-radical policies. Her government further restricted free enterprise, nationalized industries, carried out land reforms, and promulgated a new constitution that created an executive presidency and made Ceylon into a republic named Sri Lanka. While reducing inequalities of wealth, Bandaranaike’s socialist policies had once again caused economic stagnation, and her government’s support of Buddhism and the Sinhalese language alienated the country’s large Tamil minority. This failure to deal with the ethnic contentions led to her replacement as prime minister in the elections of
1977.

From 1980 to 1986, she was barred by Sri Lanka parliament for her political right of holding office which was later on granted by R.J.Jayawardene. She again ran for the political office
however, could only win the opposition majority in the parliament.

Despite her political and social struggle, she raised a family of renowned political leaders in the history of Sri Lanka (e.g. her son Anura P.S.D. Bandaranaike and daughter Chandrika Bandaranaike Kumaratunga who happens to be the first female president of Sri Lanka and appointed her mother to hold prime minister office) which mounted a major military campaign against Tamil separatists in 1995. Failing health forced Bandaranaike to resign her post in August 2000 while she suffered a heart attack shortly after voting in the parliamentary elections (October 2000) and died.