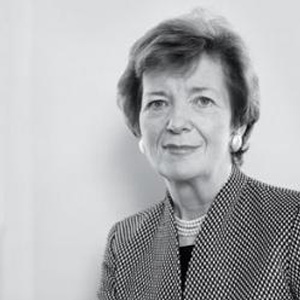 Mary Therese Winifred Robinson, born 21 May 1944 is an Irish Independent politician who served as the seventh President of Ireland from December 1990 to September 1997, becoming the first woman to hold this office. She also served as United Nations High Commissioner for Human Rights from 1997 to 2002 and a Senator for the University of Dublin from 1969 to 1989. She first rose to prominence as an academic, barrister and campaigner. She defeated Fianna Fáil’s Brian Lenihan and Fine Gael’s Austin Currie in the 1990 presidential election, becoming the first Independent candidate nominated by the Labour Party, the Workers’ Party and Independent Senators. She was the first elected President in the office’s history not to have had the support of Fianna Fáil

She is widely regarded as a transformative figure for Ireland, and for the Irish presidency, revitalising and liberalising a previously conservative, low-profile political office. She resigned the presidency two months ahead of the end of her term of office to take up her post in the United Nations. During her UN tenure she visited Tibet (1998), the first High Commissioner to do so; she criticised Ireland’s immigrant policy; and criticised the use of capital punishment in the United States. She extended her intended single four-year term by a year to preside over the World Conference against Racism 2001 in Durban, South Africa; the conference proved controversial. Under continuing pressure from the United States, Robinson resigned her post in September 2002.