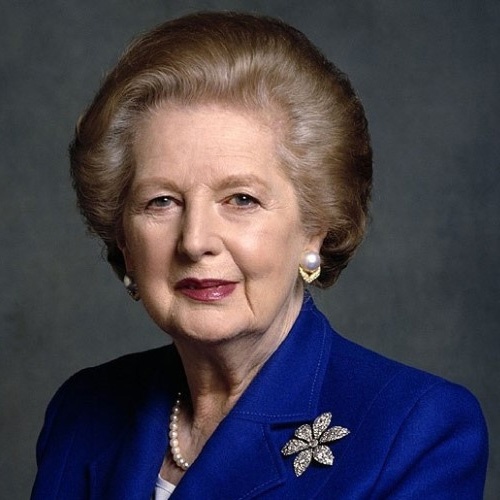 Margret Thatcher (13 October 1925 – 8 April 2013) was a British stateswoman who served as prime minister of the United Kingdom from 1979 to 1990 and leader of the Conservative Party from 1975 to 1990. Mrs. Thatcher was the first woman to become prime minister of Britain and the first to lead a major Western power in modern times. Hard-driving and hardheaded, she led her Conservative Party to three straight election wins and held office for 11 years, longer than any other British politician in the 20th century. As Prime Minister, she implemented policies known as Thatcherism.

Thatcher matriculated at Oxford University in 1943, during the height of World War II. While there she studied chemistry and joined the Oxford Union Conservative Association, becoming president of the organization in 1946. After graduation she worked as a research chemist, but her real interest was politics. In 1950 she ran for parliament in the Labour-dominated constituency of Dartford, using the slogan “Vote Right to Keep What’s Left.” She lost that year and again in 1951, but received more votes than previous Conservative Party candidates.

Thatcher ran for parliament once more in 1959—this time in the Conservative-dominated constituency of Finchley—and easily won the seat. By 1961 Thatcher had accepted an invitation to become parliamentary undersecretary in the Ministry of Pensions and National Insurance. She then steadily moved up the ministerial ranks, becoming secretary of state for education and science when the Conservatives retook power in 1970. In 1975, with the Conservatives back in the opposition, she defeated former Prime Minister Edward Heath to take over leadership of the party and, four years later, she became the nation’s first female prime minister and the first woman to lead a major Western country. She took a hard line against communism—the Soviet press dubbed her the “Iron Lady” after one speech—and set Britain on a rightward path economically, promoting free-market policies and weakening labor unions. Thatcher’s tenure of 11 years in office made her the longest-serving British prime minister of the 20th century, and one of the most impactful.