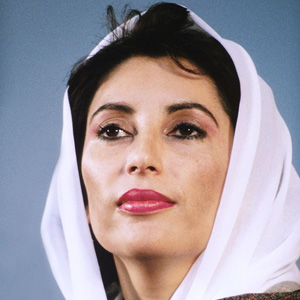 Benazir Bhutto was the first lady to rule any Muslim country in this world. She was also one of the most influential leaders of South Asia. Benazir Bhutto was born June on 21, 1953, in Karachi, SE Pakistan, the eldest child of former premier Zulfikar Ali Bhutto. Mr. Bhutto founded the Pakistan People’s Party (PPP) and was prime minister from 1971 to 1977. After completing her early education in Pakistan, she pursued her higher education in the United States. From 1969 to 1973, she attended Radcliffe College, and then Harvard University, where she graduated with a B.A. degree in comparative government. It was then onto the United Kingdom to study at Oxford from 1973 to 1977 and became president of the Oxford Union in 1976. There, she completed a course in International Law and Diplomacy.

Ms. Bhutto returned to Pakistan in 1977, and was placed under house arrest after the military coup led by General Mohammad Zia ul-Haq overthrew her father’s government. One year after Zia ul-Haq became president in 1978, the elder Bhutto was hanged after his conviction on charges of authorizing the murder of an opponent. She inherited her father’s leadership of the PPP. There was more family tragedy in 1980 when Bhutto’s brother Shahnawaz was killed in his apartment on the Riviera in 1980. The family insisted he was poisoned, but no charges were brought. Another brother, Murtaza, died in 1996 (while his sister was in power) in a gun battle with police in Karachi.

She was elected co-chairwoman of the Pakistan People’s Party (PPP), along with her mother, and when free elections were finally held in 1988, she herself became Prime Minister. At 35, she was one of the youngest chief executives in the world, and the first woman to serve as prime minister in an Islamic country. However, under the orders of President Ghulam Ishaq Khan, she was removed from office 20 months later for alleged corruption. In 1993, she was re-elected but was again removed in 1996 on similar charges, this time by President Farooq Leghari.

As prime minister, she was often referred to as the “Iron Lady” for her uncompromising approach to negotiating with unions. She pursued various free-market economic policies, such as deregulation, flexible labour markets and privatisation. However, rising unemployment and inflation (stagflation) made her economic policies unpopular. While in self-imposed exile in Britain and Dubai, she was convicted in 1999 of corruption and sentenced to three years in prison. She continued to direct her party from abroad, being re-affirmed as PPP leader in 2002. Bhutto returned to Pakistan on October 18, 2007, after President Musharraf granted her amnesty on all corruption charges, opening the way for her return as well as a possible power-sharing agreement.

Tragically, Bhutto’s homecoming rally after eight years in exile was hit by a suicide attack, which killed 136 people. She only survived after ducking down at the moment of impact behind her armored vehicle. Bhutto said it was Pakistan’s “blackest day” when Musharraf imposed a state of emergency on November 3, 2007, and threatened to bring her supporters on to the streets in mass demonstrations. Bhutto was placed under house arrest soon after, on November 9, and she called for Musharraf’s resignation four days later. The state of emergency was lifted in December 2007.

Bhutto was killed when an assassin fired shots and then blew himself up after an election campaign rally in Rawalpindi on December 27, 2007.Benazir Bhutto left a deeply polarizing legacy. Her career has been celebrated as a triumph for women in the Muslim world and for the global fight against extremism. Her efforts and struggle to champion democracy remain a lasting legacy that is deeply respected among her rivals. Several universities and public buildings in Pakistan bear Benazir Bhutto’s name, while her career influenced a number of activists, including Nobel Peace Prize laureate, Malala Yousafzai.