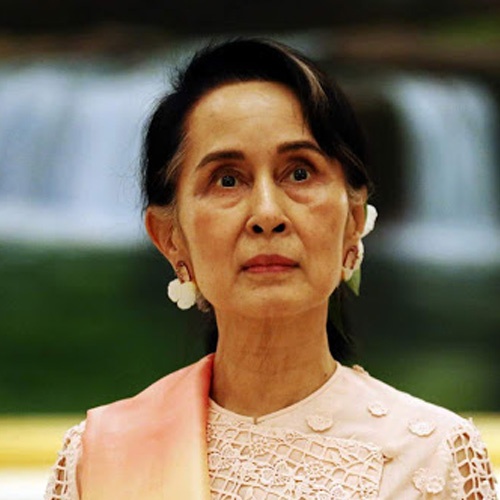 Aung San Suu Kyi is a symbol of hope, non-violence resistance and peace to her Burmese countrymen and an international champion of democracy. She has tirelessly fought militant regimes for a free and democratic Burma, living under house arrest for 15 of the last years. She was released in late 2010. Suu Kyi has been internationally recognized with the Nobel Peace Prize, Europe’s Sakharov Prize and the United States Medal of Freedom.

Aung San Suu Kyi was born on 19 June 1945. Ms Suu Kyi is the daughter of Myanmar’s independence hero, General Aung San. He was assassinated when she was only two years old, just before Myanmar gained independence from British colonial rule in 1948. In 1960 she went to India with her mother Daw Khin Kyi, who had been appointed Myanmar’s ambassador in Delhi. Four years later she went to Oxford University in the UK, where she studied philosophy, politics and economics. She married Michael Aris in 1972.

She arrived back in Rangoon (now Yangon) in 1988 – to look after her critically ill mother – Myanmar was in the midst of major political upheaval. Thousands of students, office workers and monks took to the streets demanding democratic reform. She went on to lead the revolt against the then-dictator, General Ne Win. She organized rallies and travelled around the country, calling for peaceful democratic reform and free elections.

Ms Suu Kyi spent nearly 15 years in detention between 1989 and 2010. Her personal struggle to bring democracy to then military-ruled Myanmar (also known as Burma) – made her an international symbol of peaceful resistance in the face of oppression.

In November 2015 she led the National League for Democracy (NLD) to a landslide victory in Myanmar’s first openly contested election for 25 years.

She is the state counsellor of Myanmar.  This was a position newly created by the legislature and signed into law by Htin Kyaw; the post was similar to that of prime minister and potentially more powerful than the president.