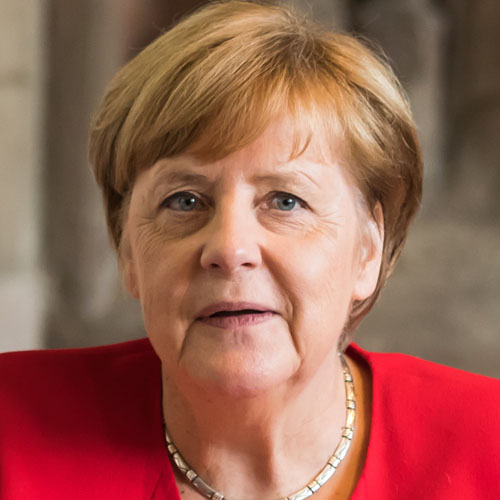 Angela Merkel – First Female Chancellor of Germany, was born in Hamburg, West Germany in July 1945. Merkel finished her high school from Templin in 1973 and later went to Leipzing to study Physics. After getting diploma she worked as member of academic Faculty at Central Institute of Physical Chemistry of The Academy of Science In East Berlin. In 1986, Merkel was awarded as Doctorate for her thesis on QUANTUM CHEMISTRY. Merkel participated in State’s Youth Organizations and became member of Young Pioneers from 1962 and in 1968 also joined Free German Youth. Her involvement with free German youth has led to controversy that she was active as secretary for agitation and propaganda at institute, though Merkel maintained her responsibility for cultural affairs. Merkel neither applied for membership of Socialist Unity Party nor she accepted any proposal by Personnel of Ministry for State Security.

After the fall of Berlin Wall in 1981, Merkel joined newly founded Democratic Awakening and in 1990 became party’s press spokesperson and later on she became Deputy Spokesperson of Government. Merkel also won a seat in Bundestag (lower house of parliament) representing Stralsund – Rugen-Grimmen. In Jan 1991, Merkel was appointed as Minister for Women and Youth by Chancellor – Helmut Khol. Khol’s choice of young female political newcomer appealed to several demographics and earned Merkel nickname “Khol’s Madchen’’ (Khol’s girl). In Sep 1992, CDU’s Chairman resigned from his position because of accusation and Merkel was elected to replace him. Merkel became Minister of Environment, Conversation and Reactor Safety in 1994 and in 1995 she presided over the first United Nations Climate Conference on Berlin. Merkel was elected as Secretary General of CDU and later in 2000 appointed as Head of CDU becoming first Women and first non-Catholic to lead the party. As leader she faced lingering effects of finance scandal and divided party. On Nov 2005, she became first female chancellor of Germany at age 51 and youngest person to date to hold the office and is serving her fourth term. In 2018, Merkel stepped down as leader of Christian democratic union and announced she wouldn’t seek another term as chancellor in 2021

Merkel remains the de facto leader of Europe, leading the region’s largest economy after steering Germany through financial crisis and back to growth. Her leadership is marked by her steely reserve by allowing more than million Syrians refugees into Germany. For now, Merkel leads a coalition government unpopular with voters, facing continuing storms from Brexit and growing anti-immigrants’ sentiments in Europe.