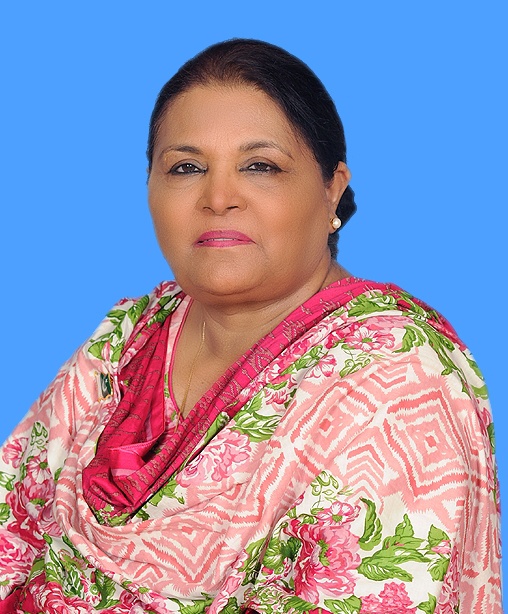 Ms Shunila Ruth, a prominent women politician from Christian community was born on June 30, 1953 at Gujranwala. She graduated from Kinnaird College for Women, Lahore in 1973 and obtained the degree of M.A (English) in 1976 from Forman Christian College, Lahore. She has served as teacher in different private schools and remained associated with various private organizations. She served as General Secretary as well as President, Young Women Christian Association, Karachi and Lahore; as Member, Women Task Force on women empowerment, Government of the Punjab during 2000-03; and is serving various Church Committees and Boards.

Currently, she is working as the National Coordinator of Women Synodical, Church of Pakistan. A social worker, who has been elected as Member, Provincial Assembly of the Punjab in general elections 2013 against one of the seats reserved for Non-Muslims. She represented Pakistan at the fourth world conference for women in Beijing in 1996 and at General Assembly – Christian Conference of Asia held in Malaysia in 2011. She was elected World Secretary of the World Federation of Methodist and Uniting Church Women at World Assembly in Korea in 2006 and in her that capacity she attended various meetings and area seminars around the world. She was elected to the National Assembly of Pakistan as a candidate of PTI on a reserved seat for minorities in 2018 Pakistani general election.

Ms. Ruth has always been strong proponent of women rights. She is actively working to enact the robust Christian Marriage and Divorce Act, which will eventually benefit the women of Christian Community. Ms. Ruth has been part of many committees working for the wellbeing of persons with disabilities, religious minorities and women.  Ms. Ruth is currently serving as Parliamentary Secretary for Interfaith Harmony & Matter Related to Minorities.