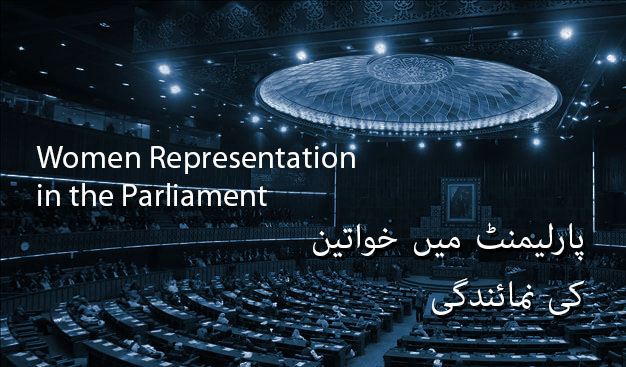 The Election Act (2017) forbidsany effort to hinder female participation in elections, nor as a voter or a candidate. The act also requires political parties to have a minimum of five percent of female candidates contesting in general elections for both national and provincial assemblies. In the 2018 elections, all mainstream national parties remained close to the minimum percentage, while over 45 % of political parties did notnominate a single female candidate. Many parties did not comply with the act fully. Those that complied with it nominated female candidates to meet the quota. Most female candidates were strategically given tickets for constituencies in which the party had no chance of winning. Many of these contestants did not even campaign for elections. In addition to quota representation in elections, the National Assembly of Pakistan has 60 reserved seats for women.

Apart from the legal framework for the national level, General Musharraf’s Local Government Plan introduced a 33 percent quota for women in the district, municipality, and union councils in 2000, bringing almost 100,000 women into politics across Pakistan. After the National Assembly passed the 18th amendment to the constitution of Pakistan in 2010, the provincial governments secured more resources and power to legislate. Since then, the local government law of all provinces, presented in 2013, has implemented a system of reserved seats for women, but their success varies across provinces. For instance, in the 2015 cantonment elections, only two women were elected out of a total 199 seats, results that fail to meet the 33 percent quota. In Balochistan, Khyber Pakhtunkhwa, and other areas with relatively conservative populations, the ratio of female contestation for reserved seats is so low that most female councilors elected ran unopposed. In Punjaband Sindh, where women’s participation is much higher than the other two provinces, the quota for female councilors was reduced to 15 and 22 percent respectively.

Despite the increase in women voters in Pakistan, the gender gap remains a concern. About 43.62 percent of voters were female in the 2013 elections, which was reduced to 39.78 percent in the 2018 elections. Increasing women’s participation in voting makes political parties more attentive to female empowerment issues.  Female empowerment, however, is not simply about increasing the number of women in parliament. Pakistan’s method of adding reserved seats in the parliament will contribute to an increase in women’s legislatures but does not necessarily bring better legislation on women’s issues or inclusivity for women without political connections. For real change, Pakistan should create a space where women without political ties and links could be encouraged to run for office. While laws are important for setting the stage for gender equality, real change must come from within political parties.