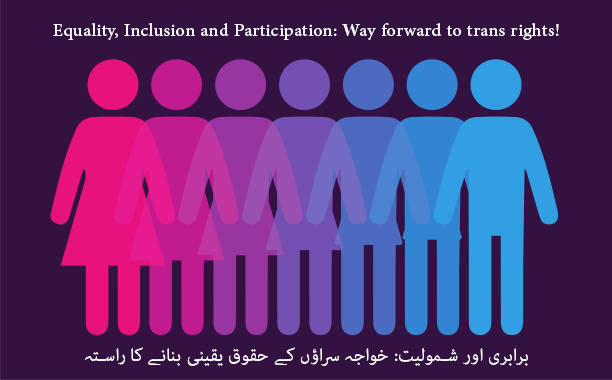 A visible number of the transgender community is to be seen in Pakistan. They come from all backgrounds of society, from a teenage kid to a 70-year-old person. They are a diverse community, representing all racial and ethnic backgrounds, as well as faith. Pakistan’s population of transgender people recorded in the sixth population and housing census in 2017 was 10,418. But leading transgender activists like Bindya Rana is not satisfied with the recorded figures. According to the transgender activists, the population could be somewhere between 250,000 and 300,000.

Out of these 2,538 trans registered voters, 1,886 transgender voters are in Punjab, 431 in Sindh, 133 in Khyber Pakhtunkhwa, 81 in Balochistan, and 7 in Islamabad Capital Territory.

The figures of the registered transgender community are alarming. Only a handful of eunuchs have a legal safeguard in the form of a national identity card. Though the year 2009 witnessed a historical move when the Supreme Court of Pakistan approved the order to include the category of “third gender” in the national identity form. Transgender people in Pakistan obtained the right to REGISTER as a third gender in their CNIC in 2012. A three-member tribunal of the Supreme Court, headed by the then Chief Justice Iftikhar Muhammad Chaudhry, ruled that the transgender community has the same rights guaranteed in the Constitution to all citizens, including the right to inheritance, work opportunities, free education and medical care, etc.

NADRA had started registering the transgender in 2012 following the aforementioned verdict given by the Supreme Court of Pakistan, yet approximately 90 percent transgenders remained deprived of this right. This community is facing a dilemma of social exclusion since forever. The level of oppression they are bound to suffer has only risen over the time. Giving them minimal employment opportunities, allowing them to register as citizens of this country by letting them possess national identity cards, and giving them a voice by registering them as voters are all the steps that have taken by the government in recent years. Still, the community is facing a curse from all possible directions.

The community’s suffering and plight has a lot more to do with public attitude than legislation. From begging on roads to entering schools and colleges for education, from fighting for getting their right to obtain national identity card to contesting general elections the journey has been long and tiring with opponents as close in relation as parents. Our society needs to accept transgender as equal human beings. We as society and government as an institution should make more rigorous efforts for the mainstreaming of transgenders, only then we can think of an inclusive and pluralistic society.