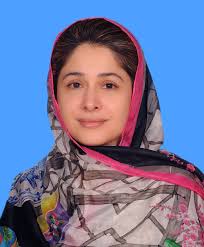 Ms Shandana Gulzar Khan was elected to the National Assembly as a candidate of PTI on a reserved seat for women from KP in 2018 general election. On 27 September 2018, Prime Minister Imran Khan appointed her as Federal Parliamentary Secretary for commerce. She was elected as the Chairperson of the Commonwealth Women Parliamentarians, a network of women members of the Commonwealth Parliamentary Association’s parliament and legislatures, for a three-year term in 2019. She is a member of three Standing Committees of the National Assembly including the Standing Committee on Privatization Planning, Development and Reform; and Industries and Production. She is also a member of the National Assembly’s Special Committee on Agricultural Products.