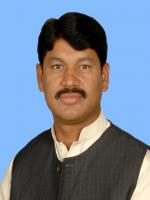 Mian Tahir Iqbal is elected member of National Assembly from NA-169 (Vehari-III) Punjab. He was elected as an independent candidate by defeating PML-N veteran politician Tahmina Doltana, however after being elected he joined ruling party PML-N. He belongs to a non-political family. He is first time elected member of National Assembly, there is no among his relatives, any renowned politician, Minister, MPA or MNA. Mian Tahir Iqbal said with genuine intentions and strong faith, even a common person can become a member of national assembly with public mandate. Opposition from the traditional landlords and politicians cannot block their way.

Mian Tahir Iqbal said he has entered in politics as a district council member. On a question regarding his affiliation with political parties throughout his political career, the young parliamentarian from Vehari told he has been associated with three political parties, one religious and two political, in his political career. During his college period, he had joined Jammat-e-Islami and Shabab Milli. Later he linked himself with PML-Q and recently he won elections as an independent candidate and join ruling PML-N. He has elected as MPA twice and for very first time he has being elected as MNA in recently held elections. My political affiliations are exceptional as I always stood against the existing frame of minds in constituency and always ally myself with opposite parties. Allah supported me and I always met with success.

Mian Tahir Iqbal stated that some political parties offered him party tickets to contest elections; however, he declined because I had the support and trust of constituents, and I was able to defeat Tahmina Doltana of PML-N as an independent candidate. Regarding his electoral campaign, he said running campaign is a hard-hitting task and requires proper planning and strategies to manage expenditures. Effective planning involves public networking within constituency. The sincere supporters paved the way of success unconditionally. Those with inadequate capabilities, lack of political expertise, and inexperienced politicians faced difficulties while running their commercialized campaigns. They have to bear heavy financial losses sometime.

He stated that facing challenges are the natural phenomenon in political sphere. Politics is a tough job and it requires hard work to deal with challenges. ‘I have faced these challenges and remain in close contact with public through thick and thin. I am a dedicated person and never set back due to any challenge. To gain public trust one has to forget his individual comfort and ease.’ He provided that ‘his objectives to be achieved as member of National Assembly, is the enactment of legislation for public relief.’ He wishes to be a Minister or Adviser. Political growth encourages politicians and constituents are also benefitted from such development.
After being elected and part of government now, Mian Tahir Iqbal stated actual challenges are a head. Public expectation level raises and they pressurize for unemployment, poverty, law and order situation, and health and educational facilities. He argued the efficient strategies are being made by them to resolve the issues of constituents. They have established separate committees of police, patwaris, WAPDA, Sui Gas, Health, District Administration, and development work, consisting notable members of the area. They all are in direct contact with constituents. He said he is directly connected with these committees and the public of his constituency. He does not have any personal Assistant or Secretary, attends all calls of his constituents, and handles their affairs personally.

Mian Tahir envisioned a Pakistan of Quaid-e-Azim for which our forefathers made enormous sacrifices. Nation has to be united to guard Pakistan from rival powers. For youth, ‘my message is to get education and trainings in every sphere of life especially in current scenario. Youth is the future of this country. Prime Minister has launched Khud Rozgar scheme for youth. Through vocational training institutes, new horizon of development could be open for our nation.’ He gave message of unity to the nation in present situation. Nation has to forgo their differences and have to play their due role for the prosperity and development of country.