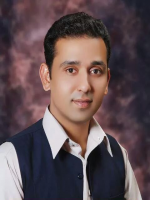 Mr. Asif shared that ‘being part of the society where system is hijacked mainly in the hands of influential people i.e. politicians, industrialists, feudal, or socialists, I failed to understand why this system works like this. Meanwhile PTI chairperson Imran khan raised the issues that were directly affecting the society. As Imran khan’s especial focus was on the youth of Pakistan, therefore I finally joined PTI in 2006.I was overwhelmed to know that this party not only accepted me but given power to strengthen the party at wards level. During my 7 years working and struggle for the party, I served as Joint secretary of District Youth Wing; Additional General District Youth Wing and finally contest election in intra-party election for the position of President North Punjab Youth that I won with highest number of votes in the region’.

The motivation of Asif Mehmood to join politics was the slogan of PTI to provide justice to every member of the society. Justice for PTI was not only a justice restricted to judiciary system but in all basic facilities including health, education, transport, security of the people. The decision to join the politics was much easier then to carry on the working for the party. Devotion needs sacrifices and in my case, I have to sacrifice the company of my family and friends. Additionally, I had to miss many social gatherings and even my office work was affected. Nevertheless, the pressure of performance for the party as well as to convince public for the real change was the biggest challenges.

Mr. Asif started his political career from the platform of Pakistan Tehreek-e-Insaaf. It was the policy of PTI to award 35 per cent party tickets in elections to the youth of Pakistan as Chairman has full confidence on youth for bringing real change. Asif Mehmood being elected President of North Punjab Youth Wing was awarded with the party ticket to contest for Provincial Assembly of Punjab from PP-9 (Rawalpindi).

In Pakistan, political parties award party tickets to big names, seasoned politicians, feudal, industrialists, and businesspersons who finance the party’s political campaigns. However, people of my constituency were completely shocked, when the ticket was awarded to a young Asif Mehmood against two times winning strong candidate. I am grateful to all party members, friends, and family who not only helped me financially but also ran the campaign door to door day and night. As party awarded me ticket only two weeks before the election and in this short time, we formed teams for door-to-door campaign day and night. The party and friends in the shape of banners, posters, and cable ads also provided financial support. Youth was most influential part of the whole campaign and with collective efforts of party workers and youth of my constituency; we achieved the goal in the form of winning the seat on 11 May 2013.

Due to being a member of opposition party, it is always difficult to meet the expectations of people as ruling party try to avoid allocation for development work programs in the constituencies of opposition party. Nevertheless, our party always stands with people’s issues and tries to raise concerns that directly affect livings of the citizens. My aim is to build youth and address the key issues that youth is facing. Basic education should be made free so that in future the youth does not become victim of corrupt system. The vocational and technical schools with professional knowledge can play vital role in this regards. In this background, I successfully proposed for youth quota in local body election that was highly appreciated. For me, politics is name of serving people and I feel lucky that I am provided by such noble opportunity. I wish educated people to come forward in this field to serve nation, as they are demand of the time.

My Dreamed Pakistan is where justice prevails in every field of life. My message for the nation and especially to youth is to work hard in whatever department you are serving irrespective of the reward as it is only among the many awards you will get during your struggle. Further, it is easy to criticize and point out mistakes in the system but difficult to become part of it and deliver. I will request specially educated class of the nation to come forward and join politics for not the benefits of your children but for the nation.