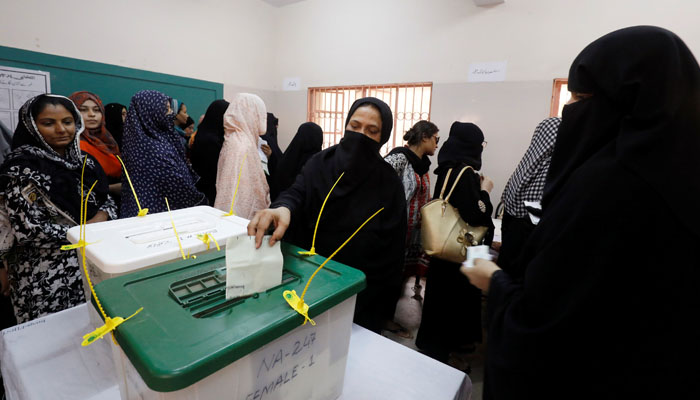 KARACHI: Counting has started across Pakistan after a daylong polling in the landmark parliamentary elections, marred by a deadly terrorist attack in Quetta, where 31 people were martyred in a suicide attack.

Preliminary and unofficial results are expected to be out in an hour.

Barring the suicide attack in Quetta, the polling process concluded peacefully in rest of the country amid heightened security. More than 350,000 troops were deployed to maintain law and order on the polling day.

Around 105.95 million eligible voters were expected to exercise their right of franchise in the country’s eleventh general election. More two dozen parties were in the race but a close contest is expected between Imran Khan’s PTI and Shebaz Sharif-led PML-N in most constituencies. PPP is also expected to retain its seats in Sindh, where it is facing a stiff challenge from a grand alliance of opposition parties.

In Karachi, MQP-Pakistan, PTI, MMA, PPP and PSP were in tight race.

In Khyber Pakhtunkhaw, pre-poll surveys showed that PTI was expected to return to power but some reports suggest that Imran Khan’s party was facing tough contest from Muttahida Majlis-e-Ammal, an alliance of religious parties.

Various political parties, including PML-N, PPP and AML, demanded an hour-long extension in the polling time which closed at 6pm. But their request was turned down by the Election Commission of Pakistan (ECP) which maintained that it had already extended the polling duration by an hour.

According to reports, queues outside the polling stations surged gradually with the passage of time where enthusiastic voters including senior citizens, male and female stood firmly to fulfill their national obligation by casting vote in favour of their candidates.

Thousands of police and military personnel were deployed to secure the polls as voters cast ballots in polling booths set up in schools, town halls.

As many as 53,000 international, national and local observers and media persons monitored the elections. In order to hold the elections in a peaceful manner and provide a level playing field to all the stakeholders, around 7,70,000 army troops performed duty out and inside the polling stations.