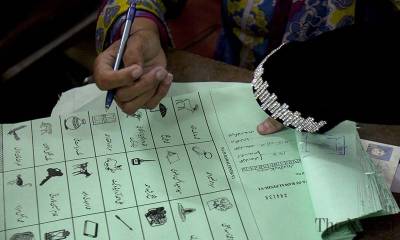 ISLAMABAD: The Election Commission of Pakistan (ECP) has established general election information centres in its provincial, regional and district offices to facilitate the voters and the general public.

According to an official of ECP, the commission has also placed the details of all these centres on its official website in addition to launching its Short Message Service (SMS) 8300 to facilitate voters throughout the country.

He said that voters can get details of relevant polling stations by sending SMS to 8300 along with their Computerized National Identity Card Number (CNIC), adding that around 10 million people had received the information about their respective polling station so far.

He said that voters can also get information about the place of vote and details regarding any constituency of national and provincial assembly.

The ECP had already issued its final polling scheme for national and provincial assemblies’ constituencies for the conduct of general election 2018 in all the provinces and the federal capital.

He said the commission had placed all the details regarding final polling scheme on its official web portal for the voters’ facilitation by ensuring the compliance with basic fundamental right under the constitution related to the right to information.