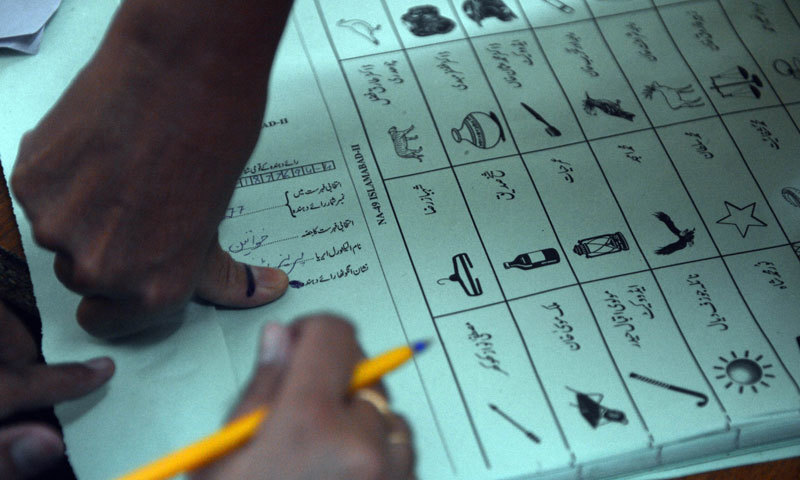 ISLAMABAD: A total of 380 candidates are in the run in the by-elections for 37 seats of national and provincial assemblies to be held on Oct 14.

According to final lists of candidates issued by the Election Commission of Pakistan, 112 candidates will vie for 11 seats of the National Assembly and 268 for 26 seats of the provincial assemblies.

Most of the seats had been vacated by those elected on more than one seat in the 2018 general elections, including Prime Minister Imran Khan who had won elections from all the five NA constituencies he contested.

Punjab in general and Lahore in particular are set to witness some exciting electoral battles.

Khawaja Saad Rafique of the Pakistan Muslim League-Nawaz (PML-N) had lost to Imran Khan in NA-131 (Lahore), but now a close contest is expected between him and Humayun Akhtar Khan of the Pakistan Tehreek-i-Insaf (PTI).

Asmi Mehmood of the Pakistan Peoples Party (PPP) and Rana Umar Shahzad of the Tehreek-i-Labbaik Pakistan (TLP) are also among 18 candidates in the run from the constituency.

Former prime minister Shahid Khaqan Abbasi will be PML-N’s candidate from NA-124 (Lahore) where Hamza Shahbaz had defeated PTI’s Nauman Qaiser by more than 65,000 votes. Ghulam Mohiuddin Deewan is PTI’s candidate in the by-election from the constituency. Shahbaz Mehmood Bhatti of the PPP is also in the run.

Ali Gohar Khan of the PML-N, Mohammad Saad Ullah of the PTI  and Shahadat Ali Khan of the PPP will vie for NA-103 (Faisalabad), where polls had been put off following the death of a candidate.

Naseem Ali Shah of the PTI, Zahid Akram Durrani of the Muttahida Majlis-i-Amal and Syeda Yasmin Safdar of the PPP and five independent candidates are in the run from NA-35 (Bannu) where Imran Khan had defeated Akram Khan Durrani with a margin of over 6,000 votes.

The PTI has fielded Alamgir Khan as its candidate from NA-243 (Karachi) where Imran Khan had won in the general elections. Amir Waliud Din of the Muttahida Qaumi Movement-Pakistan, Hakim Ali of the PPP and Sharafat Ali of the PML-N are among 22 contestants in the constituency.

Moonis Elahi of the PML-Q will contest from NA-69 (Gujrat) on a seat vacated by his father Pervaiz Elahi. The PML-N has fielded Imran Zafar in the constituency.

Chaudhry Saik Hussain of the PML-Q will vie for NA-65 (Chakwal). There are only two other candidates belonging to the TLP and Pakistan Justice and Democratic Party in the run. The PPP and PML-N have not fielded their candidates.

Mansoor Hayat Khan of the PTI and Aqeel Malik of the PML-N will vie for NA-63. The seat was vacated by Ghulam Sarwar Khan of the PTI. Candidates from the PPP and TLP and an independent are also in the run.

The PML-N has fielded Sajjad Khan in NA-60 (Rawalpindi) where elections had been postponed following the disqualification of PML-N’s Haneef Abbasi. Railways Minister Sheikh Rashid Ahmad’s nephew Sheikh Rashid Shafiq will contest against him on a PTI ticket.

Malik Khurram Ali Khan of the PTI and Malik Sohail Khan of the PML-N will be in an electoral contest in NA-55 (Attock) where PTI’s retired Maj Tahir Sadiq had won in the general elections. The TLP has fielded Syed Faisal Mehmood Shah in the constituency.

Little known Ali Nawaz Awan of the PTI and Waqar Ahmad of the PML-N will run for NA-53 (Islamabad). Imran Khan had defeated Shahid Khaqan Abbasi in general elections from this constituency.

As many as 135 candidates are in the run for 12 Punjab Assembly seats, 52 for nine seats of the Khyber Pakhtunkhwa Assembly, 43 for three seats of the Sindh Assembly and 36 for two seats of the Balochistan Assembly.