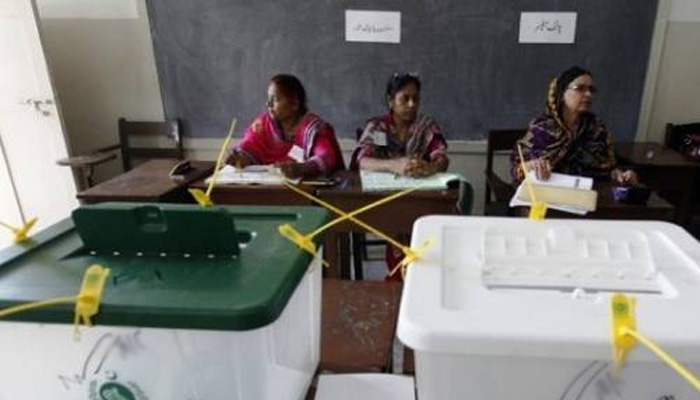 ISLAMABAD: There are 11 important points that the polling agents of political parties must keep in mind to avoid any instances of rigging and irregularities by the polling staff or the voters.

According to reports, there will be strict security and no one other than the polling staff, polling agents, contesting candidates and their designated election agents will be allowed to enter the polling stations.

The security staff and certain ECP officials however can visit the polling stations. There will be a strict ban on the use of mobile phones by the voters and polling agents. The polling agents have to strictly monitor every step of the polling process and keep a vigilant eye on the polling boxes.

According to the procedures, the polling agents have to immediately report to the returning officers of any irregularity by the polling staff or about any other wrongdoing. What will they do this time in absence of any communication channel even during the process of counting of votes will be a real challenge for them.

In addition to their routine duties, polling agents of all political parties should keep following 11 points in their mind before the polling day;

(1)- In this situation of tight security and keeping in view the little chances of movement or passing messages outside, there will be no way out to file complaint immediately to the returning officer, ECP officials concerned or to informing media in case of any irregularity. The polling agents, in a situation when they will be virtually imprisoned inside the polling stations, should plan in advance to manage the situation during the polling process in case they want to file a complaint or want to convey some message about happenings, possible irregularities, inside the polling station to their party workers and the media.

Like, all polling agents must arrange to depute some of their associates outside the polling stations so that the message can be conveyed to them through any voter or through any other means so a complaint about any irregularity can be filed immediately and media can be informed.

(2)- Polling agents must ensure that no disorder is created. They must try their best to keep calm. No harsh words should be exchanged on minor things. If some untoward situation is created and people or security men are gathered in polling room, this can be the ideal time to do anything fishy. So keeping calm and avoiding any clash or unpleasant situation is the key. If mess is created, troublemakers will be automatically benefit.

(3)- Any suspicious activity, especially when there is a rush of people or when the security people come in the polling station in large number to control such a situation, must be observed carefully. Polling agents must keep an eagle eye on the polling boxes especially when the disorder is created and there is rush of people. Miscreants will try to take advantage of such a situation.

(5)- Polling agents should also manage to report to ROs by themselves or through their associates if the journalists or observers would be stopped from their duty inside the polling stations and from monitoring the process. Journalists only monitor proceedings and transparency is ensured because of their presence. Journalists can register complaints at their own but if any instances are reported by the polling agents, those will carry more weight.

(8)- Polling agents must ensure to reach polling stations much before time and they must also ensure not to travel alone and make arrangements for their security. In case will late at polling stations, it will cause serious problems.

(11)- Polling agents should manage to report if they observe any hanky panky during polling process in the polling room or in the rooms adjacent to polling rooms. Any suspicious activity must be reported to media, RO and ECP staff immediately and same can also be done by conveying messages through voters going outside after casting their votes. Actually, it will be wrong if a polling agents will try to speak to a voter before he has casted his/her vote. However, after a voter has casted a vote, polling agents can convey any messages outside through them.

Other than this, political parties and their focal persons must immediately inform ECP officials, media and Police if any of their active workers are kidnapped or arrested during the polling process.