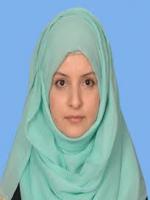 Ms. Rida Khan is Member National Assembly elected on women reserved seats on the party ticket of PML-N from Punjab. She is daughter of PML-N veteran senator Mushahidullah Khan. She is new entry in politics though she inherited politics from father. She joined action politics to raise the living standard of public and to legislate to safeguard the rights of citizens.

She joined action politics to raise the living standard of public and to legislate to safeguard the rights of citizens. She further said ‘we do not aspire for a new Pakistan. We are in favor of a country for which our ancestors made sacrifices.’

She inherited political affiliation for PML-N and also determined to be part of this party for life time.

In General Election 2013, PML-N leadership honored her to be part of National Assembly.

She expressed that she was fully trained to tackle the challenges and issues faced politically by family and political culture in the party. She stated, ‘under my father’s guidance and vision I am playing my role within party and in the parliament.’ She said parliament is supreme institution and being a member of parliament her intention is to represent the public and to raise their voices in parliament.

Pakistan that came into being on August 14, 1947 under the leadership of Quaid-e-Azam is her dreamed Pakistan. She does not aspire for a new Pakistan. She is content being member of National Assembly and aspires to serve public. For her, being Minister or adviser is not imperative.
In her massage to Pakistani nation, including youth and women, she said women have to earn name by equipping themselves with the essentials of present day, in all fields of life. Youth and women together can bring change to fate of this country. All announcements made the betterment and welfare of youth and women, by her party in election manifesto are being carried out equally in entire country. Due to the fact, youth and women of present day entered in new period of development.