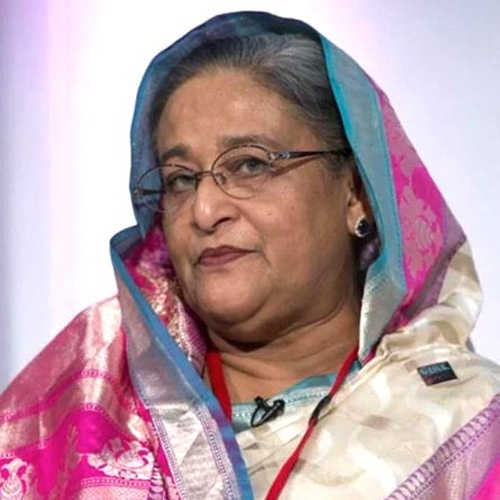 Sheikh Haisna was born on September 28, 1947 at Tungipara in Gopalganj district. She is the daughter of Bangladesh’s first President Sheikh Mujibur Rahman.

Hasina was elected as the President of Bangladesh Awami League in 1981. Through the parliamentary elections of 1991, Awami League emerged as the largest opposition party in Bangladesh.  As the opposition leader, she was always vocal against the tyranny of the Bangladesh Nationalist Party (BNP) government. Her tireless contribution to the movement against the government’s misrule forced BNP to dissolve parliament and call for early elections.

Awami League secured a massive victory in the elections on 12 June, 1996, and formed the government. Sheikh Hasina became the Prime Minister of the People’s Republic of Bangladesh.

BNP-led four party alliance won majority of the parliamentary seats in 2001 and Hasina became the opposition leader for the second time. Despite several assassination attempts including the grenade attack on August 21, 2004, she remained vocal against the misrule of the alliance government.

The people of Bangladesh elected the Awami League-led Grand Democratic Alliance to the power with a tremendous victory in the general elections of 29 December 2008 after the two-year vacuum created by what has become known as the 1/11 interim government. Again, for the second time, Sheik Hasina became Bangladesh’s prime minister, starting a new democratic era in the country.

Hasina is considered one of the most powerful women in the world, ranking 26th on Forbes’ list of The World’s 100 Most Powerful Women in 2018, and 30th in 2017. She has also made a list of “top 100 Global Thinkers” of the present decade. Hasina is a member of the Council of Women World Leaders, an international network of current and former female presidents and prime ministers. Sheikh Hasina was included in Time magazine’s 100 Most Influential People in the World of 2018.