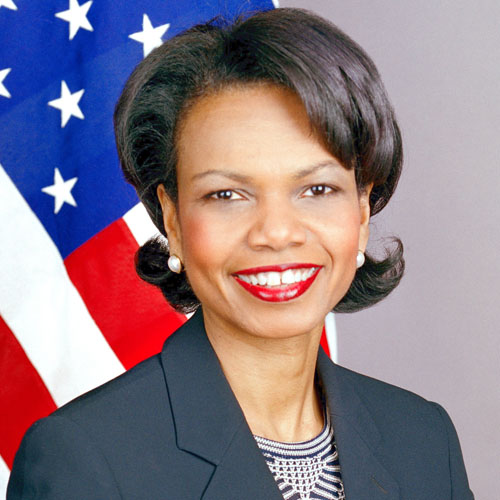 With many firsts on her credit as an African American woman, Condoleezza Rice is a politician, writer and educator who won her struggle with racism brought herself to mainstream politics with a broader stance of women in decision making through extensive political participation.

Her political career started in 1980s when she spent a good period in Washington, D.C., working as an international affairs fellow attached to the Joint Chiefs of Staff. In 1989, she became director of Soviet and East European affairs with the National Security Council, and special assistant to President George H.W. Bush during the dissolution of the Soviet Union and German reunification. In 1997, she served on the Federal Advisory Committee on Gender-Integrated Training in the Military. In 2001, Rice was appointed national security adviser by President George W. Bush, becoming the first African American woman (and woman) to hold the post. She went on to become the first African American woman to serve as U.S. Secretary of State — she became the nation’s 66th Secretary of State in 2004, following Colin Powell’s resignation, and served from 2005 to 2009.

As Secretary of State, Rice dedicated her department to “Transformational Diplomacy,” with a mission of building and sustaining democratic, well-governed states around the world and the Middle East in particular.

Apart from her political affiliations, she is an author of various books which include Germany Unified and Europe Transformed (1995) with Philip Zelikow, The Gorbachev Era (1986) with Alexander Dallin and Uncertain Allegiance: The Soviet Union and the Czechoslovak Army (1984).

She defines herself as a politician as well as an educator which reflects in her speeches. One of her speeches in the Republican National Convention in Tampa, Florida reflects her deep commitment to education stating “”I’ll go back and be a happy Stanford faculty member,” Rice said, “And, obviously, I’ll do what I can to help this ticket. But my life is in Palo Alto. My future is with my students at Stanford and in public service on issues that I care about like education reform.”