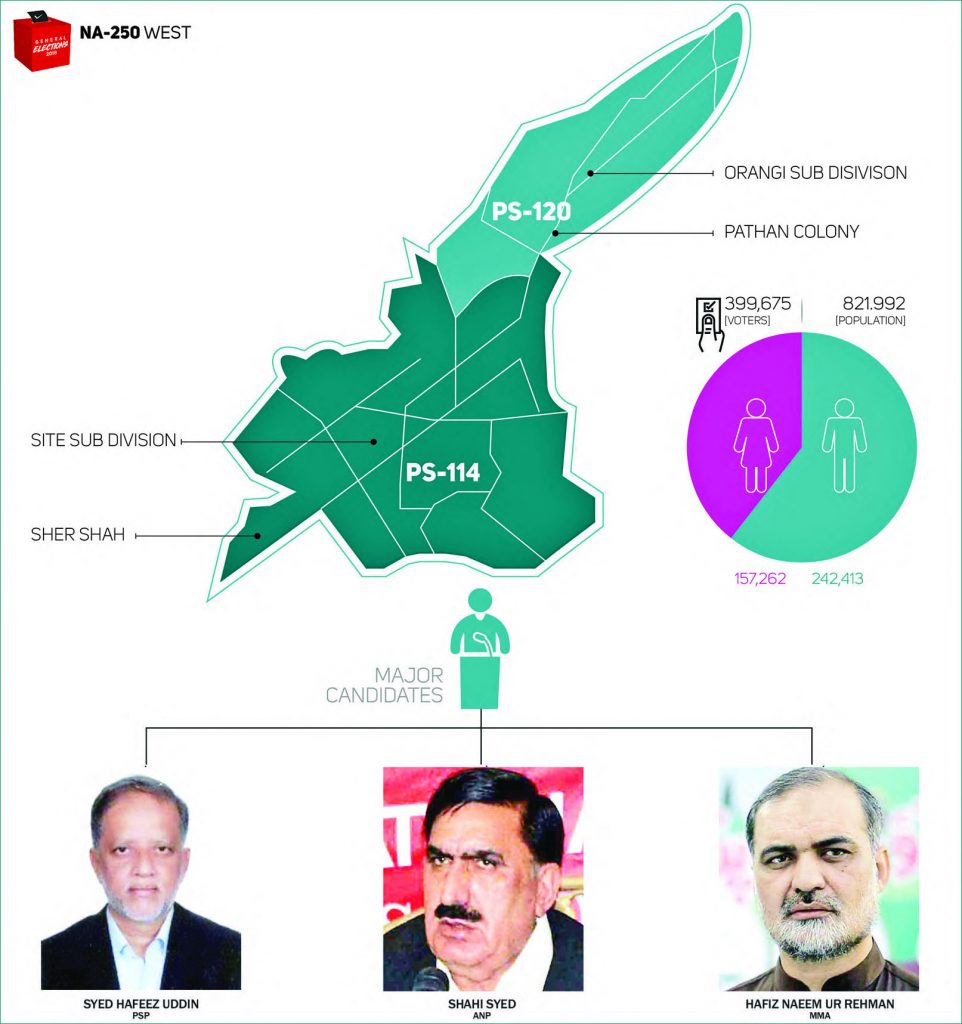 A tough competition is expected between the right wing Muttahida Majlis-e-Amal (MMA) and left-leaning (ANP) Awami National Party in NA-250 – a newly-marked constituency home to most parts of former NA-240.

Shahi Syed, president of ANP’s Sindh chapter and Hafiz Naeemur Rehman, chief of MMA’s Karachi wing, are both hoping to win the NA seat. However, political observers believe that if MMA is able to gain the support of Urdu-speaking communities, it could leave ANP behind.

According to senior political journalist Munir Ahmed Shah, ANP’s Syed has the support of various political parties, including PML-N, MQM-P and various dissident leaders of PTI. Out of these parties, the PML-N has already done seat adjustment with ANP on NA-249, while MQM-P is quietly supporting ANP, but it has not withdrawn its candidate yet.

Shah said PTI District West President Subhan Ali Sahil is annoyed about not getting a ticket to contest the seat and is therefore not supporting his party. Sahil also met Syed two weeks ago and thus it seems that PTI is in a weak position in the constituency.

The journalist further said that the MMA candidate, Hafiz Naeemur Rehman, who represents both MMA Karachi as well as Jamaat-e-Islami from Karachi, has a strong hold in NA-250, while MMA candidates, Qari Muhmmad Usman for PS-114 and Abdur Razzaq for PS-120, also have a good reputation. Razzaq was a runner-up candidate in the last general elections of 2013, so MMA has the same chances of winning from the constituency, he said. 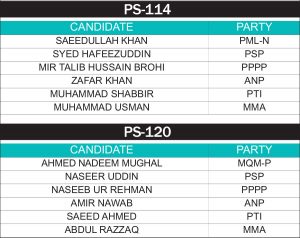 Moreover, JI leader Rehman had been highlighting issues Pahstuns were facing in the area long before the elections, including water shortage, inflated electric bills and issuance of CNICs, while the ANP seemed to have abandoned the residents after the 2013 elections. “ANP’s position is apparently strong, but MMA seems to be much stable on ground,” said Shah.

The Urdu-speaking population in NA-250 is considerably smaller than the Pashtuns; therefore, the MQM-P has little chance of winning, while PSP contender Syed Hafeezuddin, who also won a provincial assembly seat previously on a PTI ticket, could divide the MQM-P vote bank.

Another journalist and resident of the area, Khalid Mehmood, said the MMA contender has a lead over other candidates in the constituency because both Jamiat Ulema-e-Islam-Fazl (JUI-F) and JI already have a number of Union Committees in the area. But, ANP’s election campaign is much better than MMA’s and it could give the religio-political alliance a tough time. “When you calculate the vote bank of ANP and MMA, particularly in Pashtun-dominated areas, both the parties have the same popularity,” Mehmood said. “However, MMA has a little influence in Urdu-speaking areas as well, which gives it an edge.”

“It seems MMA will win PS-120, but PS-114 is not totally in its favour because Pak Colony and Jahanabad are those areas which have less religious voters,” he added.

Mehmood, however, said that MQM-P could not be underestimated in the race because the area has more than 40 percent Urdu-speaking population. But PSP could pose a threat to its vote bank.

PSP candidate Syed Hafizuddin, who had won a provincial assembly seat from the constituency, hoped that people would consider his previous performance when voting. “I know the suffering of the people and I did what I could for them. I raised my voice at each and every forum, including the Sindh Assembly and K-Electric and Karachi Metropolitan Corporation,” he said.

Hafizuddin added that the constituency falls in the SITE area and most of the residents are labourers. “Being a lawyer, I also highlighted the problems of labourers as well. This is why I believe that I will get the overwhelming support of voters from NA-250,” he said.

Meanwhile, Hafiz Naeemur Rehman said MMA’s door-to-door election campaign has attracted the attention of locals. “We have the support of religious parties while a large number of the residents tend to vote for MMA,” he said.

According to Rehman, JI has successfully resolved issues like CNIC issuance, water shortage and electricity-related problems before election, that too, without enjoying any position in the government. The Bihari and Pashtun communities were mostly facing these problems and now they would have space for MMA, he claimed.

The MMA candidate said if elected, his party’s first priority would be education because District West has the least number of schools. The other priority would be resolving the water shortage and unemployment.

ANP’s Shahi Syed said his party was electioneering in the constituency at full speed as it has remained an ANP stronghold. “All the contestants believe that they will win the seat but they forget that NA-250 is the home ground for ANP,” he said.

However, MQM’s Fayyaz Qaimkhani said his party was facing difficulties in running its election campaign in NA-250. He claimed PSP workers were creating hurdles for MQM and had moved a “false” application with the police against MQM-P workers and removed the party’s flags – actions that violate the ECP’s code of conduct.

“Our voters are intact and committed to the party, while other parties have no control over their voters, thus, there are certainly chances of MQM-P winning,” he claimed.